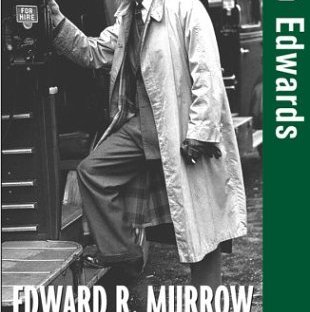 Edward R. Murrow and the Birth of Broadcast Journalism by Bob Edwards

The author, Bob Edwards is a former NPR Morning Edition host. According to Cressman (2006), “Edwards writes with the authority of someone who knew Murrow” (p 160).” Even though the author never knew Murrow personally, he was a student of Ed Bliss Jr., who wrote for Murrow while serving at CBS as an editor. The author acknowledges that he acquired most of the information about Murrow from Ed Bliss Jr. through conversations that spanned over thirty years.

The book contains the highlights of Murrow’s career as a journalist. The ten chapters chronologically outlines Murrow’s rather adventurous and extensive carrier. The Inclusion of Murrow’s broadcast reports word for word bring life to Murrow’s charismatic character, while adding flavor to the narrative. As Smith, D (2004) points out; the author firmly points out Murrow’s desire to use television and radio as promoters of education throughout the book.

Edward Murrow holds a heroic status in this narrative. The great dangers Murrow faced in Europe during his World War II coverage aids the author in painting a picture of a die-hard reporter. Murrow’s deadly encounters during the war described in vivid detail keeps the reader in a state of awe. The author tries to engage the reader furthermore by shedding light into Murrow’s personal and family affairs.

In the article ‘The Man Who Invented Truth’: The Tenure of Edward R.

The reports and direct quotes of Murrow speeches included in the book enables the reader to engage with Murrow’s personal interpretation of media. Murrow criticized his contemporary media saying “I would like television to produce some itching pills rather than this endless outpouring of tranquilizers..” (Edwards, B 2004, p. 134). Here, we see a summary Murrow’s dissatisfaction of how popular media used its influence.

When I picked this book I was not aware of the iconic status Edward Murrow held in broadcast journalism. Here, the author provides a concise account of an influential contributor of broadcast journalism. Historical events such as World War II, the Cuban missile crisis and the red scare surround the tale of this passionate journalist.

I would recommend this book to anyone interested in news media because of the inspiration one can derive from Murrow’s fearless passion for reporting.

Murrow as Director of the United States Information Agency During the Kennedy Years. Cold War History, 4(1), 23-48.

Edwards, B. (2004). Edward R. Murrow and the Birth of Broadcast Journalism. John

I didn’t choose to write. View all posts by Cheran Ratnam