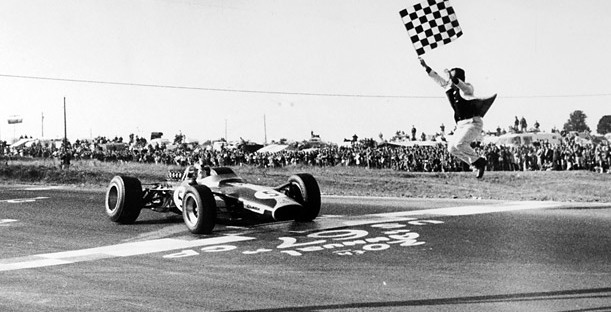 Formula 1 auto racing undoubtedly is one of the quickest and exciting sporting events in the world.

As Formula 1 fans await the upcoming Santander sponsored races: Santander British Grand Prix (June 28-30) and Grosser Preis Santander Von Deutschland (July 5-7), following is some historical information about F1– especially since the next race will be in Silverstone, England, where the first official F1 World Championship took place in 1950.

Santander entered into Formula 1  sponsorship with TeamVodafone McLaren Mercedes in 2007, and has celebrated 14 race wins and one F1 World Championship with the team. In 2009, in its quest to become a truly global player, Santander signed a five-year sponsorship deal with Ferrari and in 2012, extended the alliance to 2017.

Ron Howard’s biopic, Rush, due out this year, will recount the renowned rivalry between James Hunt and Niki Lauda, which lead to a crash that left Lauda with severe facial scarring. The movie is set in the 70’s, but F1 history runs much further back.

Formula 1 emerged from the European racing scene during the inter-war years, with its roots running back to the early days of motor racing. But, as exciting and nerve wrecking Formula1 is, the death toll of the series is hard to ignore – especially during the early years. Between 1952 and 1994, 38 Formula 1 drivers were killed during championship races.

Giuseppe (“Nino”) Farina won the inaugural title in 1950. Juan Manuel Fangio soon became a key figure, winning with five different manufacturers in the 1950s. Pre-war manufacturers like Alfa Romeo, Ferrari, Maserati and Mercedes Benz dominated the race, even though there were many drivers who owned and operated their own cars.

As manufacturers continued to make technological advancements, a constructor’s championship for companies producing an engine or chassis was introduced in 1958.

Highlighted by nine driver’s championships among British and Commonwealth drivers and the ten constructor’s titles won by British teams, 1962-1973 is considered the British era of dominance, where the British Racing Green Lotus emerged as the dominant car. From 1984 to 2008, McLaren, Williams, Renault and Ferrari won every world championship.

I didn’t choose to write. View all posts by Cheran Ratnam